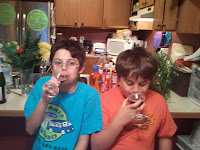 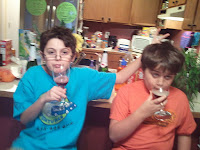 Following a sampling of the ciders (apple/grape and apple/pomegranate) by the monkeys, dinner was presented.  Note that it is not easy getting a decent picture of these guys.  Too bad they're not photogenic like their mom.  *clears throat* 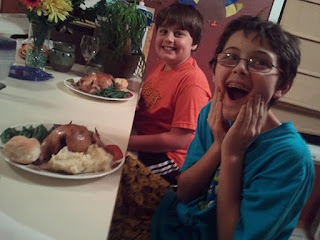 Henry and I had some pumpkin pie.  Alex is not a pie kinda guy.  Both kids gave me mad props for a wonderful Thanksgiving.

Today has been a lazy day.  The second bag of mashed potatoes was polished off by the kids, with pieces of hen thrown in.  Thankfully, Henry ate the last piece of pie.  I made myself a chicken sandwich with potato bread, sharp cheddar cheese, REAL mayonnaise and course ground deli mustard (extra horseradish!).

There are still dishes to clean, but I'll think about that tomorrow.  I did some sleeping, reading and I'm done with my laundry, too.  Oh yeah, and I vacuumed my room.  I love to vacuum, but don't like hearing the dogs holler the entire time.  Sophie is the worst.  She was even barking when I turned it off.  Sigh.

The recipe was handily displayed on the Fire, thusly: 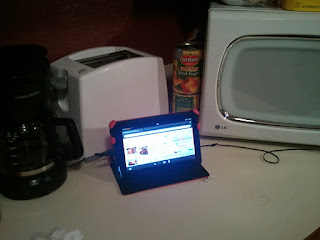 After procuring the rosemary, I set about making the hens dance with some olive oil, ably assisted by Henry.  Alex was a bit grossed out.  With the assistance of Henry's clean hands, I peppered and salted, stuffed with rosemary and a Cutie quarter, and placed the birds on the pan.  Of course, there was some garlic.

Into the oven they went.  Soon the house smelled of rosemary.  Delightful.

The sides for the feast were green beans and mashed potatoes.  Have microwave, will travel.


Here the birds are, roasting away:

The rolls were not terribly exciting, so I didn't take a picture of them.

I can't believe it's not butter turkey!
This year I opted for Cornish game hens.  What's in a name?  Not a whole lot, apparently, as Wikipedia says that they are neither game nor necessarily hens (female).  In short, they are little domesticated chickens sold whole.  Throughout the day, they were referred to as chicken, turkey, hens, and Cornish game hens.  I still have half of a turkey in the freezer from last year, and since I don't like wasting food, hens were the perfect choice.  Bonus: tiny wishbones for everyone!


The wonders of Google led me to a recipe for these little guys on Allrecipes.com:

As mentioned previously, I did not have a lemon or chicken broth, so I improvised with Cuties oranges.  I substituted the minced garlic in the big jug from Costco for the whole cloves.

I have lots of fresh rosemary from my front yard, so I braved the rain (after changing my slippers) and picked several sprigs.

I am so thankful for my life : the parade and dogs

This Thanksgiving was super. We watched the parade just to see my niece. The kids had never watched the parade and I hadn't in years. Now I remember why. :) Their dad would be proud that I exposed them to a smattering of Broadway musicals courtesy of the NBC broadcast: Newsies (no Christian Bale-what a rip!), Priscilla, Queen of the Desert (they were confused), How to Succeed in Business Without Really Trying (the kids were shocked and confused that Harry Potter sang) and Spiderman (why?). We saw the mass cheerleading spectacle that was Ashlee. We could not pick her out, but the we got the general idea. Way cool.  She'll point herself out when we're in California for Christmas.


Following the parade, I imposed my mom-will and watched the AKC dog show. Henry was sporadically interested, in between loud reactions to the game he was playing on the lappy and attempting to explain stuff to me from his game. Alex took that opportunity to go play on the SNES. He played some sort of combat basketball game and enjoyed it immensely. There was a lot of hooting and hollering. Later, he ended up playing Firefox, one of his dad's favorites.
I did some online shopping while watching the dog show. The sight of unaltered male purebred dogs can be disconcerting at first; They're not something you see all that often. Anything I say from here about the testicles will seem weird.

Anywhoodles, I lost interest and departed to my room to bathe and prepare for cooking.  I kept it classy (always) by wearing the only avian shirt I could find, velour pants and Hello Kitty slippers.

I'm cooking Cornish game hens. Rosemary and Cuties. I have no lemons or chicken broth, so I'm improvising with Cuties and Cuties juice. Pics and whatnot later.
Posted by Carol at 4:38 PM No comments:

If you have not seen Marcel the Shell, you are truly missing out.
Posted by Carol at 8:59 AM 2 comments: