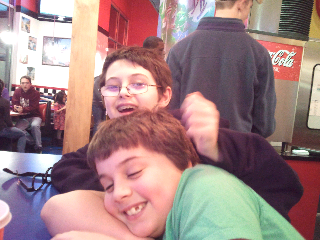 This was imposed by me in an effort to reconnect and re-engage with my boys, as well as show them that we don't need all that technology to have a good time.  The rules were simple: 7 consecutive days of no technology and a day gets tacked onto the end if any of us use technology (except music).  Also, it was a good excuse to play Seattle tourists.

(in no particular order other than what popped into my head as I was writing this)
Things the kids and I did NOT do during our Technno-no-no Week:

The week was not without challenges, but overall, we had a great time.

I'm looking out the window here at work and the sky is blindingly blue.  And there's snow on the ground that's melting.  WEIRD!
Posted by Carol at 12:44 PM No comments: