Thanks to Henry getting a free ticket to the game, we attended an Aquasox minor league baseball game in Everett.  The Aquasox are associated with the Seattle Mariners, and their opponents on this night, the Vancouver Canadians, are associated with the Toronto Blue Jays.  Way cool.  A chorale group from Everett sang both the Canadian and American national anthem, which was kinda cool.

OK, it's minor league ball and it shows: multiple errors on both sides and the Aquasox were shut out.  Painful to watch, for sure, but fun anyway.

Alex had a hot dog and Henry a chowder bowl.  I stuck with peanuts and a hot dog
The rainbow was worth the little bit of rain that fell. 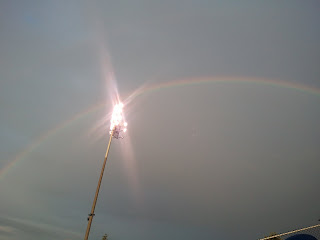 We opted not to stand in line for the kids to run the bases after the game,.  We did take the obligatory "face in the hole" picture, which looks kind of creepy when you realize that those are the frog's eyes. 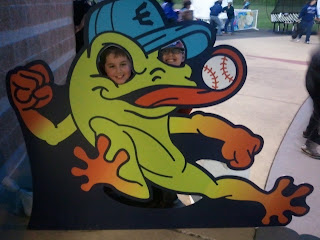 The truly sad part is that the ballplayers have that logo on their ball caps.

The team is Short-Season A classification team in the Northwest League, of which they are the current defending champions.  Short-season means that its season does not start until June, after major-league teams have signed their amateur draft picks to professional contracts.  I interpret this as the guys who didn't make it.  Better than working at McDonald's, I guess.

The kids played catch and ate.  They weren't all that interested in the actual game, which is fine.  Alex did surprise me with his knowledge of the game.

My unsolicited thoughts on the Designated Hitter:  if your only job is to hit, then you better be the best gall-darned hitter there is.  Sadly, that is not the case.  I think it sucks.  Then again, I was (am) a Giants fan and growing up the AL (A's) had the DH.  Pitchers should have to hit.

I miss me some "This Week in Baseball".

Email ThisBlogThis!Share to TwitterShare to FacebookShare to Pinterest
Labels: Family